John Carter was of Irish birth and parentage. His father, Julian Carter, emigrated to this country from Ireland in 1821, and settled in Oswego, N.Y. He was a farmer, merchant, and lumber manufacturer, and was actively engaged in business until his death, which occurred in 1873. John, his only child, was born in Queens Co., Ireland, October 10, 1820. Soon after his birth his mother died, and he was reared by his grandparents. He attended school until he attained his eighteenth year, when he joined the "constabulary," a corps of men employed by the government to preserve order; he served in this organization until 1845, when he came to America, where he joined his father, with whom he was associated in business for three years. At this time he made an extended tour through Michigan, preparatory to choosing a home there. The following spring he removed to Milford, Oakland Co., and was engaged in a flouring-mill until the spring of 1850, when, deciding to engage in farming, he purchased eighty acres of partially improved land, upon which he remained until 1856, when he sold and removed to Pleasant Valley, where he purchased two hundred acres of land which he now owns. He has since added to it two hundred acres; his present farm is considered to be one of the most valuable in the county.
Mr. Carter not only occupies a prominent position among the representative men and leading farmers of the county, but has identified himself largely with the politics of his district, county; and town. For several years he represented Brighton upon the Board of Supervisors, where he was considered an able and efficient member. He was elected to the Legislature in 1872, and served in the extra sessions of 1873 and 1874. He was again nominated in 1874, and although Livingston County is largely Democratic, he was defeated by only fifteen votes. In his own town his integrity and ability have won for him an enviable position, as is evidenced by the fact that at his election in 1875, as magistrate, he received every vote in the township but three.

April 19 1849, Mr. Carter married Jeannette, daughter of John and Jane Lambie, of Camden, N.Y. She was born in Ayrshire, Scotland, January 30, 1827. In 1831 the family emigrated to this country, and settled in Camden, Oneida Co., N.Y., where Mr. Lambie pursued his former avocation, that of a dairyman and stock-dealer; he was a shrewd, enterprising man, and possessed of more than ordinary energy and determination. He died in Camden in 1834.

It may be truly said of Mr. Carter that he has been "the architect of his own fortune." Commencing life in a new country, with only his natural resources for his capital, he has attained success in all his undertakings. 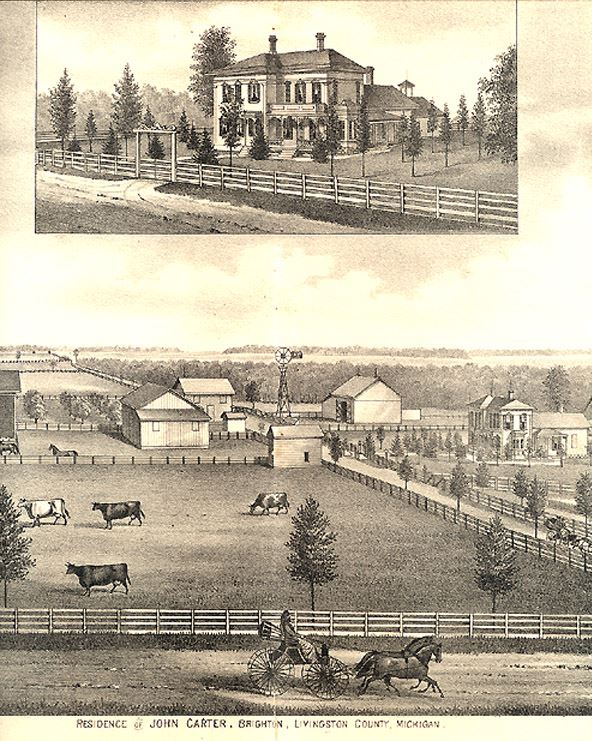